How to Avoid Power Struggles with Your Children 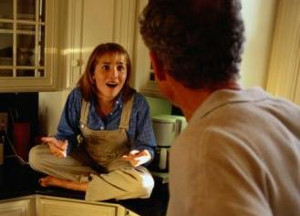 Inevitably, some time within your parenting career, you will face a power-struggle with your child. If you don't, you may be too intimidating, your child may be rather compliant, or you have mastered the art of managing conflict. Power-struggles occur due to a variety of factors, but invariably make a parent feel fatigued, frustrated, and helpless.


Power-struggles emerge as a conflict over demands, wants and needs. Parents will attempt to get their child to manifest certain desired behaviors while the child may choose to react to the request in a negative manner. Children demonstrate various techniques for "testing" their parent's patience. They may cry, have temper tantrums, manipulate, avoid contact, become aggressive, and refuse to comply with expectations. Parents may employ various methods in trying to hold their children accountable regarding their requests. They use control, lecturing, pressure, guilt, bribery, sulking, or aggressive behavior as strategies to get what they want from their children. None of these methods generally work very effectively.

Parents who seek counseling will indicate that they have tried everything in their arsenal in an attempt to get appropriate behavior displayed by their children. Power-struggles may occur over issues such as schooling, household chores, and a child's desire for more freedom, or a child merely wants his own way. Power-struggles can be minimized when parents change their tactics with their children. This process can be accomplished if a parent is open to new ways of managing problems. Below are a few:

• Parenting is not about doing things the "right or wrong" way. If what you are doing isn't working, shift gears and move in another direction.

• Most power-struggles can be avoided by establishing meaningful, consistent, logical consequences. Children should be informed regarding the nature of positive and negative consequences. Fight the urge to engage and merely lay out the consequences for appropriate or inappropriate behavior.

• Major in the majors. Don't "lock horns" over issues of little consequence. If you do, the little issues will become major storms.

• Involvement, teaching, role-modeling and coaching work better than power as a means of managing your children.

• Never acknowledge or entertain temper tantrums. Distance yourself and isolate your child (time-out) until she is ready to respond rationally.

• Don't get "hooked" by your child's behavior. Step back, take a deep breath, disengage, and set logical consequences appropriate to the offense.

• Consequences for children should primarily be positive, providing a preventative means of avoiding the potential for power-struggles. Unreasonable consequences imparted to a child while a parent is angry will serve to reinforce the power-struggle.


• By all means, avoid power-struggles over school. Power-struggles over a child's education are number one on the list. Rather than pontificate with children about grades, capabilities, and school failure, ask them to explore and make value judgments about their performance. On occasion, monitor their performance, but fight the urge to continuously confront them about their failures.

Set positive consequences to encourage completed work. Emphasize the quality of their work (process) rather than grades (outcome). Utilize outside resources, if necessary, such as tutors, parent advocates, and counseling services rather than confronting educational issues yourself. Maintain a sense of involvement with your child that is not conditional upon school success. Ironically, it may break the power-struggle and generally lead a child to change his perspective about schooling.

• Remember, you are the adult. Kids will always try to test the limits.

• Make sure that your logical consequences that are based on negative behavior are reasonable. Consequences are designed to be used until improved behavior is observable.

• Always explore problems rather than confront them aggressively. Have your children make value judgments about their behavior rather than you making judgments on their behalf.

Avoiding power-struggles involves setting appropriate limits for your children, being consistent in enforcing them, and being reasonable with the management of consequences. Remember, positive consequences are much more effective in leading to improved behavior and help eradicate power-struggles. Children will respect you more if you are significantly involved in a positive manner in your child's life and choose to role-model the behaviors that you desire your children to emulate.