Six Things You Should Never Say to Your Kids 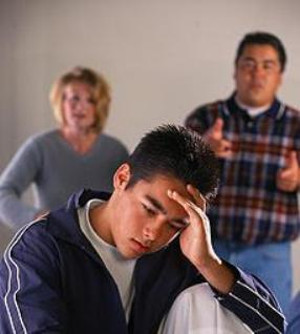 Do you find yourself saying things to your child during an argument without even thinking about it? Let's face it, it's almost impossible to be detached or objective when your child is in your face fighting with you. And naturally, it feels like a personal attack when he's saying rude things or calling you names. During those moments, it's all too easy to respond with something hurtful. All of a sudden, your feelings take over-your emotions jump into the driver's seat and your thinking moves into the back seat.

Almost every parent has gotten mad and said things to their kids they wish they could take back. The trick is to figure out how to remain in control so you don't end up saying something you'll regret. Though this is easier said than done, trust me, it is possible-and it's a skill you can learn, just like anything else.


On the Parental Support Line, we hear from people all the time after they've had arguments with their kids. They call us to get perspective and to find out ways they can manage their children's behavior-and their own responses-more effectively. Here are some examples of the types of phrases I believe you should avoid saying to your child during an argument. (Later, I'll suggest some things you can say-and do-instead.)

1. "That's ridiculous! How can you be upset about that?" If you have a teenager in the house, you've probably seen him get upset about issues that seem insignificant or petty. You wonder how he can stomp into his room and slam the door just because his girlfriend didn't text him back immediately. While his behavior might seem ridiculous by adult standards, try to refrain from invalidating his feelings. Think about a scenario where you've been upset and someone has brushed off your emotions. How did that make you feel? When a child believes his thoughts or feelings have been denied, not only does he feel more isolated, he's liable to get even more angry, frustrated and moody.

2. "You're just like your father."/"Why can't you be more like your brother?" Even though it sounds fairly harmless, this one-two punch knocks down your child and his dad or mom. When Dad is frequently criticized in the home, for example, it's not a compliment to your child to be compared to his father. And every time his dad is put down in the future, your child will receive two more punches.

It's uncomfortable for kids to hear their parents saying negative things about each other, and if a child has been labeled as being "just like his dad," he will feel anger and shame when Dad is criticized. If it's an ex-spouse your child is being compared to, he may also feel that this is a threatening statement. In other words, if he's just like his father and his parents are divorced, where does that leave him?

It's also a mistake to say things like, ?Why can't you be more like your brother?" This is a pitfall for parents, especially when you have one child who acts out and one who behaves fairly reasonably. When you use this kind of comparison, it's hurtful and also pits your children against each other-you are tapping directly into sibling rivalry and actually fanning the flames between your kids. Remember, they are unique and each has good qualities.

3. "You never do anything right."/"You're a loser." Being called a screw-up or an idiot is demeaning. These things are said to make people feel shame, or to put them in their place. Though many people think shame is a good way to punish kids, I don't think it gives children the tools they need to learn new skills. In fact, it will often have the opposite effect because it may cause them to withdraw. In the long run, shame will make your child less capable of making the right decisions.

By the way, shame is different from guilt, which can actually be a healthy emotion. Feeling guilty is not bad because it contains feelings of remorse and accountability. You should feel regret when you do something wrong or hurtful; that's natural. You want your child to feel some guilt when she borrows her sister's sweater without asking and then ruins it-and you want her to be accountable for that action. But don't use shame to try to make your child feel guilty. Shame has the effect of saying, "You're a worthless person." When the message is one of embarrassment and humiliation, it doesn't teach accountability.

We've all been fed up with our kids and thrown up our hands, but this phrase makes children feel isolated and should be avoided. "I'm through with you," is an angry threat often said with the desire to hurt the other person. In the long-term, continuing to say these types of remarks to your child will hurt your relationship.

Think of it this way: A child depends on his parents for survival. Parents provide protection, food, clothing and housing. So if the person who is in charge of nurturing the child makes a statement saying, "I'm cutting you off," it's shocking, frightening and can be very wounding.

5. "I wish I'd never had kids." First of all, I want to say that you're not a monster if you've felt this way. We are all capable of feeling negative things at certain times. After a difficult day or a crushing argument with your child, you might think, "Sometimes I wish I never had children," because you're exhausted, drained and upset. It's important to understand that this feeling is "of the moment," and is not your overall emotion.

When you're feeling this way, I recommend that you bite your tongue and take some time to yourself to decompress and get back on track. Using these words to make your child feel badly for something he's done will usually only serve to make your relationship with him more volatile. If your child thinks he has nothing to lose-including your affection-he will often act out more.

If you do say this to your child in the heat of an argument, it's important to go back later and say, "Listen, I realize that I said, "I hate you, too," and I want to apologize. It was wrong to say that to you. I am going to try to do a better job with my anger in the future." Keep it about your issues; you don't have to give your child a long explanation.


What to Do Instead of Saying Something You Might Regret

Parents wield a lot of psychological power over their kids. We tend to forget that sometimes-especially when our children are making us crazy. This happens to every parent, but we have to remember to hold back our emotions and our words and only say the things that are going to help teach the lessons we want our kids to learn.

If you're in that moment of extreme anger and frustration with your child here are several things you can do.

Take a deep breath: Take a deep breath when you're upset. This will make you feel less tense and the pause will give you time to stop yourself from saying those hurtful words. Remember, as James Lehman says, "You don't have to attend every fight you're invited to." Look at it this way: what happens when one side lets go of the rope in tug-of-war? The line goes slack and the other side has nothing to struggle against anymore. Take a deep breath and let go of that rope. This will give you time to calm down and regroup.

Refocus: Learn how to refocus your child on the task at hand. If you're trying to get your 12-year-old to do their homework and he gets angry and says, ?I hate you,? I suggest you respond with, "We're not talking about whether you love or hate me right now. What we're talking about is you doing your math. Let's focus on that." Kids will sometimes try to manipulate parents into a power struggle in order to avoid doing something they don't want to do. Try to focus on what needs to be done-and don't let their words derail you or bring you down to their maturity level.

Replace your words with an action: Recognize that if you've gotten to the point where you're about to blurt something out that you may regret, it's a sign that you should leave the argument altogether. Again, you don't have to attend that fight. What you need in this situation is an exit strategy. Simply state, "I don't want to talk about this right now. We'll talk later when things are calmer." Then leave the room.

Resolve to stop: Sometimes people call the Parental Support Line and say, "I don't know how to stop saying these things to my child." It sounds simple, but part of how you stop is by making up your mind to quit. Tell yourself that you won't allow yourself to say those things anymore; they are no longer an option. When you take that possibility off the table, you will then be able to do something different.

Try to think about what you want your relationship with your kids to look like ten or twenty years from now; don't simply focus on this moment of tension when your frustration is really high.

As a parent, there are days when you open your mouth and hear your own mother's or father's words coming out-good and bad. I believe that parents usually don't mean it when they say hurtful things to their kids. But remember, what you say-and what you mean-isn't always what your child hears. As James Lehman says, "It's important to realize that what comes out of your mouth doesn't always get into your child's ear the way you want it to."

In any close relationship, people are going to bump into each other now and again. Unfortunately, people say hurtful things-we've all done it. But honestly, if a parent can go back to their child and say, "I'm sorry that I said this to you, I realize that it was wrong," that's usually enough. Most children are very forgiving; they love their parents and want to get along with them. They may still remember what you said, but they'll also remember the apology. That's good role modeling for any relationship, because you're saying, "I made a mistake. I'm sorry. I'm going to try not to do this anymore. And I love you."

("Six Things You Should Never Say To Your Kids" reprinted with permission from Empowering Parents)
by Carole Banks, MSW