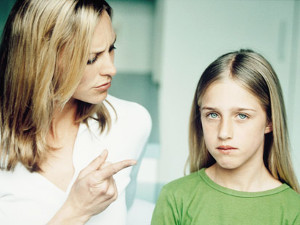 Have you ever been shocked by what comes out of your child's mouth? You're living in the fantasy world of perfect parenting. Then one day your preschooler looks at you straight in the eye, and in an angry tone yells, "You're stupid!" or during a shopping trip screams at the top of his lungs, "I WANT THAT NOW, not on my birthday!" Maybe your middle schooler has surprised you with, "I hate you!!"


Yikes! Your sweet angel has turned into a self-centered brat, no? No. These occasional bursts of disrespect are normal. Kids push limits and test parents all the time, especially young children. It's their job, and it's a parent's job to continue to set limits, boundaries and expectations in a calm and controlled way.

Not exactly. Rules and consequences help enforce limits. When kids are young, we need to keep them safe with limits. For example, we might tell a young child, "don't run into the street," or "don't get in a car with a stranger." But ultimately, our goal as parents is to set limits and provide consequences to  ultimately help children regulate their own behavior and make good choices. When kids get in the practice of making good choices based on their parents' expectations, they will learn appropriate and safe behavior through practice.

Limits and rules will create a safe and secure environment for kids. Small children need to have a predictable and safe environment. If kids have the run of the house with no limits and expectations, they feel out of control and may behave in ways that reflect that. They will get into trouble, and parents will get angry at them. Then it becomes confusing because there were no limits in the first place, and they weren't able to make good choices based on their parents' rules. Providing a home with no expectations and limits is especially hard on kids when they transition to school.  Teachers have limits, rules and consequences. If a child comes from an environment without, then he will be resistant to following the school rules. It's not familiar or comfortable.

How to set limits in your home

Remember, limit setting is different for young children than older children. We need to intervene and keep very small children safe by literally picking them up at times if they are moving toward an unsafe outcome (the street, the stove, a strange animal). By picking the child up and saying a firm, "no," you are setting a limit.

As children get older, we set limits by restricting them from activities that may be harmful to health and well being. For instance. a parent may limit the amount of Halloween candy a child can eat in one sitting. Or, a parent may limit the time a child can stay at a friend's house on a school night. Kids are kids, not adults. Kids don't always have the ability and forethought to make good choices for themselves.

But, remember to pick your battles. If you are too restrictive, you won't  give your child a chance to learn from her behavior. You may find that you're battling constantly over everything. It's not a fun way to live. You need to let some things go and trust that natural consequences will be a good teacher. For instance, if your preteen doesn't wear his coat to school on a cool day, his natural consequence will be to get cold. That's ok. It won't kill him, and he'll probably take his coat with next time. But  if he's going to a new friend's home, and you haven't met the parents, you may need to touch base with the parents before he's allowed to spend time at the home.

Don't be afraid to be the "bad guy"

At times, a parent may not set limits because he is either afraid of push back, or he doesn't want to be "the bad guy." Your job is to parent your child, not be her friend. You are doing her a disservice by forgoing the limits. Remember, by setting limits and consequences you are helping your child learn to make good choices for herself. And sometimes, she's not going to like what you have to say! That's part of being a parent.  In the end, she'll appreciate your love, support and concern. And you will grow a responsible, conscientious adult!

And don't forget to reinforce your child's good choices with praise. As we let our kids loose in the world, making their own decisions more and more, they will succeed at times and fail at times, too. Be there as a loving supporter when the choice your child makes doesn't work out. Talk it through. Help him figure out why the choice he made wasn't the right one. And when he makes a good choice for himself, let him know!

With love, respect and limits, your child will learn to make good choices for herself and live a responsible and conscientious life!